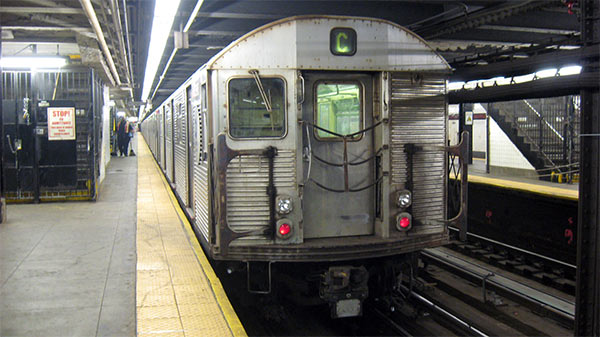 I dig New York. And as crowded and filthy as they can be, I dig their subways too. I usually like flying by the seat of my pants when I catch the train, but I needed to get to midtown Manhattan in a hurry. My friend Scott was in town while I was visiting last summer, but he had to catch a flight out in about 2 hours.

My directions said to catch the C train going downtown. So I got into the subway at 125th Street in Harlem. Clamoring down into the station, sweat-glazed, and looking around with meager luggage in tow, I found I’d rushed for no particular reason. The A train came. And then the E. And then another A. I got anxious. I started to think my C train wasn’t coming. One more E came rushing through, picked up some passengers, and left behind an intimidating silence.

“Maybe I’m waiting on nothing. I heard there was some kind of modified service on the weekends. Maybe they were talking about this C train. I don’t think it’s coming. The A and E trains both head downtown though. Maybe you should board one of those and at least you’ll have gotten somewhere.”

It’s the same discouragement I felt after hearing too much “Jesus is on his way.” “The Word is true, you just have to keep at it.” All the while, no one has broken through the clouds. The promises have proved empty and nothing supernatural has transpired.

I thought, “I’m gonna miss Scott. Forget this. I’m just gonna board the next train that comes and figure something out when I get near 49th Street.”

Just then, another train emerged from the dark, green lights spelling out C. I laughed at myself. I felt foolish and elated, and I could hear Jesus saying with a wink, “See? I told you I was coming.”